Homemade cinnamon rolls recipe with date filling is easy, tasty, healthy, and simply the best sticky buns because you made them from scratch! Yippee! These rolls are perfect for breakfast, brunch, or desserts! These surprisingly easy-to-make cinnamon buns are comforting and satisfying; they make for a pretty excellent breakfast for those special mornings! Also, perfect for brunch, dessert, or snacks; the best part is that this cinnamon roll recipe is healthier than those you can typically buy from the mall or store.

If you love cinnamon buns and are scared of their crazy number of calories, try these homemade cinnamon rolls with date filling! It has all the flavors and deliciousness with lesser calories! Click To Tweet

My Pregnancy and Cinnamon Rolls.

I love cinnamon rolls; I fell in love with rolls (as my kids call it), when I was pregnant for my first child. On this faithful day, I went to PG Mall, and as the smell of cinnamon filled the entire mall, I wanted so bad to eat those. I eventually located the Cinnabon’s store and bought three big individual boxes of cinnamon buns formerly known as caramel pecabon; they typically top it with caramel and pecans! In reality, I wanted more than three, but I cautioned myself a got “only” three! 🤣🤣🤣

Finally, I got home, relaxed, and dowloaded an entire caramel pecabon that has a total of 1080 calories. Then I sat the two leftover pecabons in the freezer and consumed them in the next couple of days! As a result of my pregnancy cravings, I went from never caring about cinnamon rolls to now overindulging! YIKES!!

After falling in love with Cinnabon’s pecabon during pregnancy, and I continued to enjoy it now and then. My kids come to like it as well, and subsequently, it became a constant feature in our house whenever we go to the mall! With this in mind, I decided to make my very own homemade cinnamon rolls but make them healthier and better!

Then I saw Sohla’s recipe, and that greatly inspired these homemade cinnamon rolls with date filling! This recipe is easy, and alongside dates, I also added coconut sugar; it replaced brown sugar. I hope you will like this version as we have!

The Second Time was a Charm!

The first time I tried making homemade cinnamon rolls with date filling, I allowed it to rest/rise overnight, just like the original recipe. Let’s call it Kechi’s 24-hour cinnamon date yogurt rolls (oh, I didn’t mention that I had also used yogurt in these buns? well, I did)! That first try was perfect, but it took a very long time. And the buns turned out excellently yummy! But I may not always have 24 hours to rest the dough. Am sure you can relate. 😜

My second experiment landed me on the best homemade cinnamon rolls. On the positive side, it is equally healthier (because I used almost the same ingredients), and at the same time, it is incredibly time-saving! These easy and quick homemade cinnamon date yogurt rolls are a must-try! Besides, I have also tried making this recipe with milk, and it still turned out great. Personally, I prefer yogurt because it gives it a rich taste (in my opinion)

Why I Love this Healthy Homemade Cinnamon Rolls Recipe:

For the Glaze (Topping)

HOW TO MAKE HOMEMADE CINNAMON ROLLS:

How to Make Date Filling:

First of all, as soon as you plan to make this recipe, soak the dates in hot/warm water. This way, they would soften before you process them! If you look close in the photo below, you will notice that my dates are soaked in water. When the dates are soft, remove the seeds, and add them to the food processor alongside the other filling ingredients.

Process until smooth, taste to ensure it has enough salt. Feel free to add a dollop of maple syrup if you desire it to be sweeter! This filling will make you the best homemade cinnamon rolls that are equally healthier! Set aside to use when needed.

How to Make the Dough in the Food Processor:

First, I have a confession to make: I am one other those people that frequently use the food processor to combine the dough, and thankfully that works so well here. Typically, I will add the dry ingredients and turn the food processor on; then, I will follow up with the wet ingredients until it forms a dough.

On the positive side, this method is so quick and makes this recipe easy! On the negative side, it can easily break down your food processor if you process it for so long! Alternatively, use your hand the old-fashioned way to mix the dough; it is a method that never runs out of fashion! But, this is a very soft dough, and likely to stick to your hands. It is important to remember to warm up the oil and yogurt before combining with egg, yeast, and sugar. Please be sure to check out the homemade cinnamon rolls with a date-filling video for a guided visual step-by-step process.

The process of rolling, filling, and proving these healthy homemade cinnamon rolls is easy. It may seem cumbersome initially; just know that if I make it, you can too! Also, be patient because it gets better with practice!

Cutting and Proving the Dough:

Gently, use a serrated knife to cut the dough into equal sizes and place it on a well-greased baking dish.
To prove or proof dough means the final rising of dough before baking. I would typically prove this dough for 1 hour to 1 hour and a half. After the dough is fully proved, place in the oven and bake for 25 – 35 minutes depending on the size of the dough and the temperature of the oven.

Frosting, icing, and glazing are some of the words used to describe the topping that go on most baked foods. I am old-school (and was raised in Nigeria), so, am usually fine with enjoying my baked treat without additional topping. Having said that, I generally go with less topping for this sticky buns recipe. Also known as thin icing because less is more!

On the contrary, why pile up loads of, say, cream cheese frosting on them if we are looking to keep this healthier? But as with everything, you decide which type of frosting you want and how much is enough. Remember that this cinnamon bun recipe is only a guide; feel free to make it your way! Alternatively, I enjoy a dollop of strawberry sauce on these sticky buns as well!

How many calories is a healthy cinnamon roll?

A serving of this healthy homemade cinnamon roll is 406 calories per serving. This is a big difference when compared with Cinnabon’s pecabon at a whopping 1080 calories!

How long can you store unbaked cinnamon rolls?

You can store unbaked cinnamon rolls in the freezer for up to 6 months; I wouldn’t keep them longer than that!

Can I leave cinnamon rolls out overnight to rise?

Yes, you can leave cinnamon rolls overnight to rise in the fridge. This will allow the gluten to develop fully. I did this the first time I tried this recipe!

How do you Store Leftover Homemade Cinnamon Rolls?

You can store leftover homemade cinnamon rolls in the fridge for a couple of days and in the freezer for up to eight weeks. Heat up and enjoy whenever you wish.

Homemade cinnamon rolls recipe is easy, tasty, healthy, and simply the best sticky buns because you made them from scratch! These healthy cinnamon buns are just 406 calories and equally as delicious and comforting as those from the Cinnabon shop! Click To Tweet Print
Print Recipe
Pin Recipe

Homemade cinnamon rolls recipe is easy, tasty, healthy, and simply the best sticky buns because you made them from scratch! These healthy cinnamon buns are just 406 calories and equally as delicious and comforting as those from the Cinnabon shop! These homemade cinnamon rolls make for a great breakfast on special mornings, brunches, or desserts. The best thing is that you can always bake them ahead, keep them in the fridge or freezer, and simply heat up and enjoy at wish!

If you put the glaze immediately the rolls come out of the oven it will melt into them (which is superb, BTW). However, if you prefer to see the frosting, wait for at least 7 – 10 minutes before frosting/glazing.

Measure the flour correctly, and do not flour your surface when rolling out the dough (if possible)

You can easily sub yogurt with milk; I have made this recipe using both. I personally use yogurt most often because I love richness vibes it gives.😂🤷🏾‍♀️

Make the date filling while waiting for the dough to rise; relatively make the glaze when the dough is baking.

Feel free to customize to suit you! Make sure to check out the video for step-by-step video guidance!

Thanks for stopping by, please let me know what you think about this recipe in the comment! 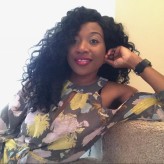 Hi, I'm Nkechi "Kechi" Ajaeroh, a Public Health professional turned Inspirational author slash exceptional home cook. A 2x International Best Selling Author of Elevate Your Life with the Power of Positive Perception and Gratefully Growing. African, (specifically, Nigerian) Food Enthusiast, watermelon connoisseur, on my to finessing my fitness. This blog is all about loving food, living life, practicing gratitude, and inspiring you to use your wings. Join the journey.

Homemade Beet Juice Recipe (in the Blender and Juicer)

This site uses Akismet to reduce spam. Learn how your comment data is processed.